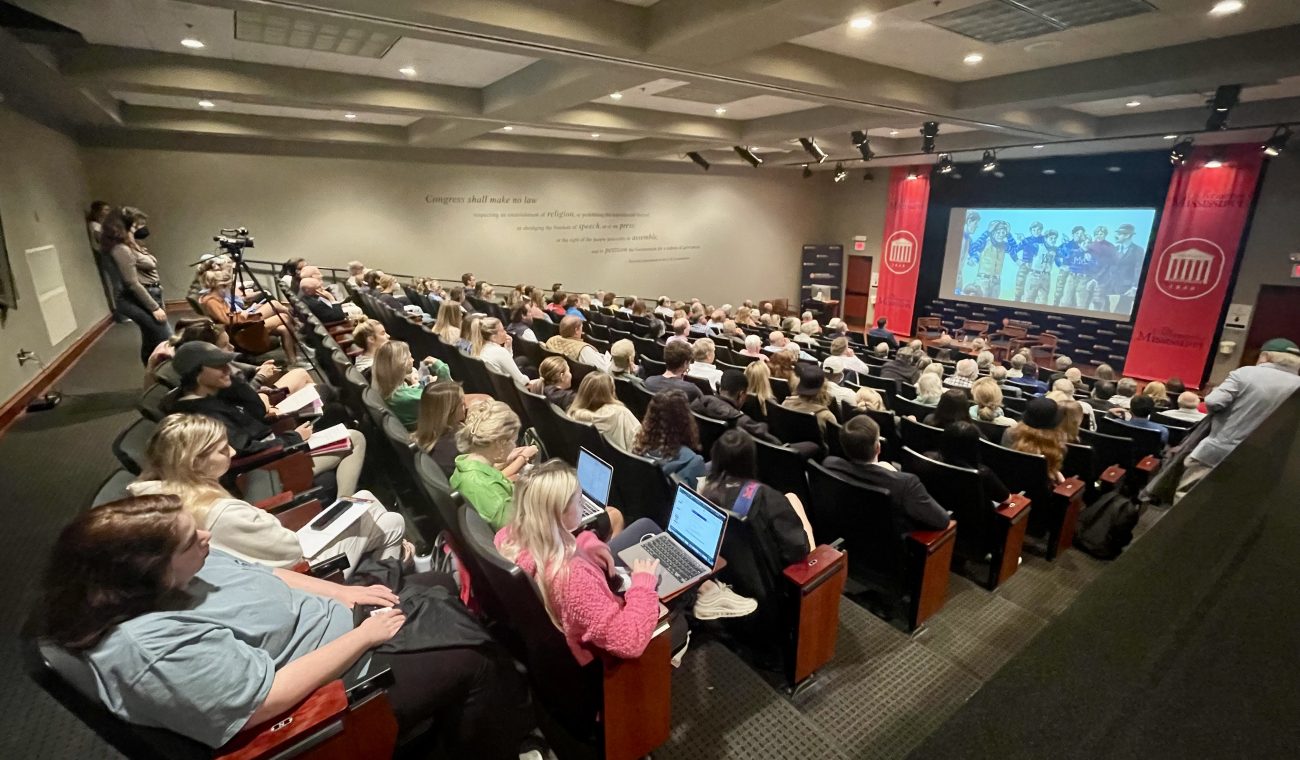 The Overby Center for Southern Journalism and Politics opened its spring slate of programming Tuesday night with a partial screening of a new documentary film on the undefeated 1899 Sewanee University football team, followed by a panel discussion with Charles Overby, Ole Miss athletic director Keith Carter, and the film’s two directors, David Crews and Norman Jetmudsen.

“I’m particularly excited about this being the opening program.” Overby said. “David Crews and I have been friends for a long time going back to when he was press secretary for William Winter and I was editor at the Clarion Ledger.”

The 90-minute film, Unrivaled, tells the story of a football team in 1899 from a small university in the mountains of Sewanee, TN along with the problems they faced during their greuling season schedule and how they came out undefeated. Playing 12 games in 6 weeks, some of these games back to back, many players sustained horrible injuries but still continued to play throughout the season.

“What we discovered was a more deeper, richer, textured story.” Crews said. “It is, I think, one of the most rarest and most dramatic seasons in football history.”

Even after graduating, members of the team continued to emerge as important figures in history like team manager Luke Lea who became a newspaper publisher, U.S senator, and U.S soldier in World War I, according to film director David Crews. Crews expressed interest in doing a documentary film on Luke Lea and his life.

One thing that the film displayed was the tiring schedule of the games and the large distance that the Sewanee Football team had to travel with little time to rest. Carter said that this type of scheduling would be nearly impossible today, but also noted that some similarities such as the passion from the fans and players, remain virtually the same more than 120 years later.

“I just thought it was really cool.” Carter said. “Things have changed, the money changed, a lot of the way we travel obviously has changed but there’s still so many similarities that there was passion, the fans loved it and they were very proud of their team.”

Crews and Jetmudsen said they were motivated to take on this project because of the lore and the truth behind the story. Sewanee was the first and only team to ever play a season schedule so complicated and greuling yet still come out undefeated, so they felt like making this film was a way to preserve a crucial piece of not only college football but Southern history.

“This one accomplishment will ever be duplicated.” Jetmudsen said. “If we had not done the film now, 20 years from now, this story would have been lost forever.”

The next Overby event will be on the intersection of critical race theory and Mississippi civil rights education with Overby Fellow Randall Pinkston on Tuesday, March 9th at 5:30 pm.