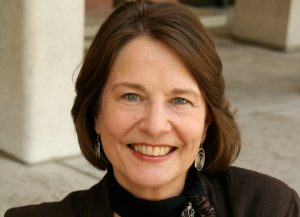 Veteran journalist Geneva Overholser, who led the Des Moines Register to the Pulitzer Prize for Public Service during her seven years as its top editor, was at the Overby Center on Wednesday to discuss “Journalism and Democracy in Crisis.”

“There is no question that the enormous weakening of journalism, especially locally, has contributed to a sense of democracy that people are not confident about what they know,” said Overholser who is now a consultant who writes and speaks about the future of journalism. She was also the ombudsman for The Washington Post and was on the editorial board of The New York Times.

“There’s no question that you can be highly informed with all the different sources of information,” said Overholser when asked what is contributing to the crisis. “The problem is you have to be your own editor. … Be mindful about the sources you are looking at.”

Overholser has also written extensively about the press and its coverage of politics. After the 2016 presidential election, she examined the many ways she thought the press had badly failed its coverage. With her appearance at the Overby Center coming the day after Super Tuesday, the discussion, led by Charles Overby, will also include their analysis of the election results and press coverage.

Until 2013, Overholser was director of the Annenberg School of Journalism at the University of Southern California. Through the Annenberg Public Policy Center, she published a manifesto on the future of journalism titled “On Behalf of Journalism: A Manifesto for Change.” She is also co-editor, with Kathleen Hall Jamieson, of the volume “The Press,” part of the Oxford University Press Institutions of American Democracy series. Before joining the Annenberg school, she held the Curtis B. Hurley Chair in Public Affairs Reporting for the Missouri School of Journalism, based in the school’s Washington bureau.

Journalism & Democracy in Crisis: Veteran journalist Geneva Overholser, who led the Des Moines Register to the Pulitzer Prize for Public Service during her seven years as its top editor, was at the Overby Center on Wednesday to discuss “Journalism and Democracy in Crisis.”