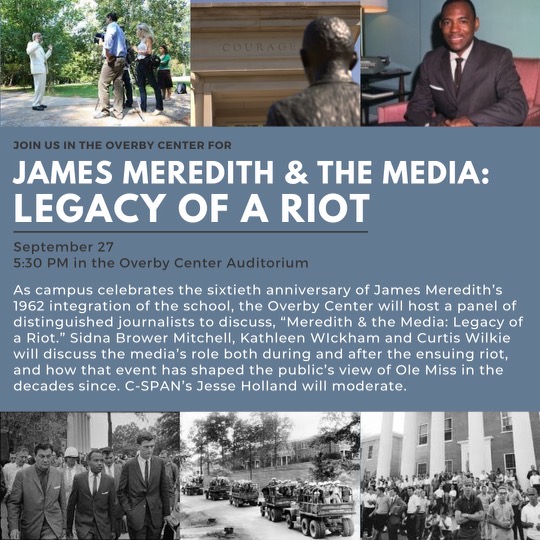 The Overby Center for Southern Journalism and Politics will continue its fall programming next Tuesday night with a very special panel celebrating the sixtieth anniversary of James Meredith’s integration at the University of Mississippi. “Meredith & the Media: Legacy of a Riot” will feature distinguished journalists Sidna Brower Mitchell, Kathleen Wickham, and Curtis Wilkie, with C-SPAN’s Jesse Holland moderating.

Mitchell was the student editor of what is now the Daily Mississippian during the riots in 1962, and her editorial calling for calm amidst the chaos earned her a finalist nod for a Pulitzer Prize. Wilkie, a former Overby fellow and faculty member at the University of Mississippi, was a student during the riot.

Wickham has been a journalism professor at the University of Mississippi for more than 20 years. Her research area focuses on media coverage of civil rights, so the Meredith integration story runs right up her alley. She first became hooked on the project around the time of the 40th anniversary.

“I realized a reporter was murdered,” Wickham said. “On this campus. And he only gets a sentence or a paragraph? I was horrified. Being a journalist for 10 years, I wanted to know more about this man. That’s what kicked me off. I feel like when you shoot a reporter, it’s like sending a bullet through the First Amendment.”

That drive has led to several different publications and accolades for Wickham in the ensuing 20 years. She now serves on the 60th Anniversary Committee for the university and is helping organize sales for the official commemorative book of the anniversary, James Meredith: Breaking the Barrier.

“They were looking for a takeaway and I said ‘what about a book?’ and they were like ‘A book! That’s a great idea!” Wickham said. “We thought to have a little book that is only 155 pages that would have a variety of authors and voices. There are four men and four women, four white authors, four black authors. We wanted to make sure we had a diversity of voices.”

Taken together, the group of authors will “complete a narrative” of James Meredith’s story, beginning and ending with his own writing. The book will be sold outside of the auditorium following the event.

All Overby Center programs are open to the public and begin at 5:30 p.m. in the Overby Auditorium on the campus of the University of Mississippi. A generous reception and open bar will follow.